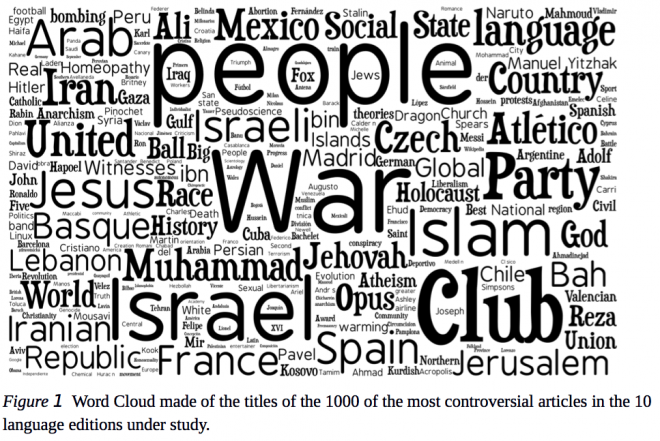 Interesting analysis of Wikipedia, highlights how religion drives ‘edit wars’, reflecting its status as one of the most controversial topics on the collaboratively edited, multilingual, free internet-based encyclopedia.

Researchers from Oxford University explored the overlaps between the most contested Wikipedia articles in different languages and maps the geographical localities of the controversial articles based on their content.

The comparison demonstrates that despite Wikipedia’s multilingual formats, there are controversial topics that cut across the different languages.

While Israel, Adolf Hitler, The Holocaust & God top the list; Jesus, the Prophet Muhammad and Christianity are also regularly fought over by editors, reflecting their high degree of contestability across multiple languages and cultures.

However, somewhat surprisingly, most of the contested and controversial topics are language dependent. For instant, the English Wikipedia occupies a unique role. The language’s universality means that English Wikipedia ends up being edited by a broad community beyond those for whom English is the mother tongue.

As a result, globally disputed themes are often represented in English Wikipedia, including topics such as ‘Jesus’ and ‘Race and intelligence’.

Through visualizing the controversy in Wikipedia, the researchers have identified topics that appear to have cross-linguistic resonance (e.g. Arab-Israeli conflict), highlighting not just the topics and places that different language communities are interested in, but also the topics that drive editorial interest, controversy and conflict amongst different groups in the world’s largest encyclopaedia.