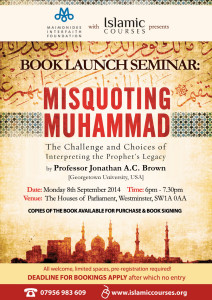 Co-organised by the Maimonides Interfaith Initiative and Islamic Courses we are pleased to announce a unique event with Professor Jonathan A.C. Brown, author of the critically acclaimed ‘Misquoting Mohammed: the challenge and choices of interpreting the Prophet’s legacy’.

Few things provoke controversy in the modern world like Islam. Modern media are replete with alarm over jihad,  underage marriage and the threat of stoning under Shariah law. Sometimes rumour, sometimes based  in fact and often misunderstood, the tenets of Islamic law and dogma were not set in the religion’s founding  moments. They were developed over centuries by the clerical class of Muslim scholars.   ’Misquoting Muhammad’ takes the reader back in time through Islamic civilization and traces how  and why such controversies developed, offering an inside view into how key and controversial aspects  of Islam took shape. From the protests of the Arab Spring to Istanbul at the fall of the Ottoman Empire,  and from the ochre red walls of Delhi’s great mosques to the trade routes of Islam’s Indian Ocean world,  Misquoting Muhammad lays out how Muslim intellectuals have sought to balance reason and revelation, weigh science and religion, and negotiate the eternal truths of scripture amid shifting values.

Professor Jonathan AC Brown was raised as an Anglican and converted to Islam in 1997. He received  his BA in History from Georgetown University in 2000 and his doctorate in Near Eastern Languages  and Civilizations from the University of Chicago in 2006.

Professor Brown has studied and conducted  research in Egypt, Syria, Turkey, Morocco, Saudi Arabia, Yemen, Indonesia, India and Iran, and  he is a term member of the Council on Foreign Relations. His book publications include The Canonization  of al-Bukhari and Muslim: The Formation and Function of the Sunni Hadith Canon (Brill, 2007); Hadith: Muhammad’s Legacy in the Medieval and Modern World (Oneworld, 2009) and Muhammad: A Very  Short Introduction (Oxford University Press, 2011). He has published articles in the fields of Hadith,  Islamic law, Sufism, Arabic lexical theory and Pre-Islamic poetry and is the editor in chief of the  Oxford Encyclopedia of Islamic Law.

Professor Brown’s current research interests include the history of forgery and historical criticism in Islamic  civilization; comparison with the Western tradition; and modern conflicts between late Sunni traditionalism and Salafism in Islamic thought.