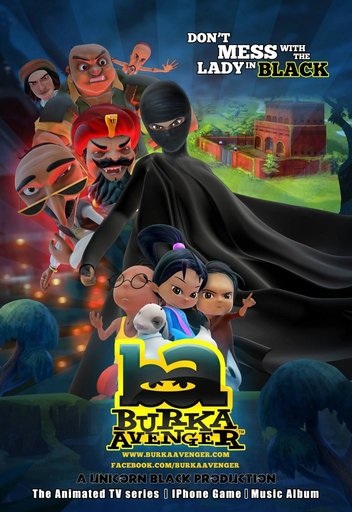 Fabulous, Fabulous, Fabulous – we really love this! Inventive animated action-comedy, with a serious and social purpose edge. Due to debut on Pakistan television this month, it centers on the trials and tribulations of female superhero ‘Burka Avenger’, who uses books and pens against bad guys trying to shut the girls’ school where she works.

Pakistan’s first caped crusader is a burka-clad superhero fighting school-hating baddies by night and moonlighting as a gentle, compassionate schoolteacher by day.

Featuring guest appearances and original songs from some of the biggest musical acts from across South Asia, including Ali Zafar, Haroon, Ali Azmat, Josh and many others; it is set to cause a stir in a country where female literacy is estimated to stand at 12% and where international focus on the Taliban remains, following the attack on Malala Yousafzai as part of a concerted and devastating campaign which has seen hundreds of girls’ schools blown up in the north-west.

While the cartoon series is welcomed by many some women right activists question the use of the burka on the superhero character due to sensitivities around religious extremism and the garment’s strong association with the suppression of women.